My Current Song on Repeat:

So again I have iTunes free weekly songs to thank for this find. I downloaded the video ot even knowing what it was, I had never heard of the Pretty Reckless, but hey why not, I could always delete it if I didnt like it. When it first came on I was pleasently surprised the singer had a good voice and it had a certain moodiness about it.  When I started to watch the video I quickly realized that the singer is Taylor Momsen from the show Gossip Girl.  Now, usually I dislike actors turned musicans, the only other person I can think of that I feel did it successfully is Jerad Leto (Front man of 30 Seconds to Mars), who was on My So Called Life and small roles in various movies. I can say with confidence he is a way better singer than he was actor. But I digress, for only being 17, Taylor has a certain soulfullness that is unexpected of someone of her age. Like any good front person she can inject emotion into the words she is singing. The band does well of backing up the moodiness of Taylors voice, and it all works together.

I do have to admit:
The video, not so great. Poor Taylor, I don't know what happened to her fasion sense but it certainly escaped her. Hopefully, she's just being a rebellous teenager and she will get back on track, because her look lately and in this video is not working for her.

There is a line in this song that just kills me, every time I hear it I have to turn it up and sing loudly (and not well) along.

Just tonight
Do you understand who I am?
Do you wanna know?
Can you really see through me now?

Other Pretty Reckless Songs worth repeating:
Make Me Wanna Die
Zombie
My Medcine
Miss Nothing 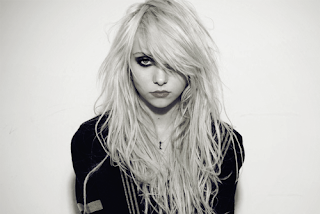