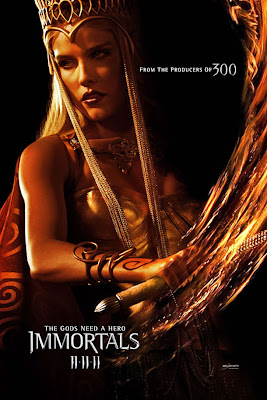 What it is about:
Eons after the Gods won their mythic struggle against the Titans, a new evil threatens the land. Mad with power, King Hyperion (Mickey Rourke) has declared war against humanity. Amassing a bloodthirsty army of soldiers disfigured by his own hand, Hyperion has scorched Greece in search of the legendary Epirus Bow, a weapon of unimaginable power forged in the heavens by Ares. Only he who possesses this bow can unleash the Titans, who have been imprisoned deep within the walls of Mount Tartaros since the dawn of time and thirst for revenge. In the king's hands, the bow would rain destruction upon mankind and annihilate the Gods. But ancient law dictates the Gods must not intervene in man's conflict. They remain powerless to stop Hyperion...until a peasant named Theseus (Henry Cavill) comes forth as their only hope. Secretly chosen by Zeus, Theseus must save his people from Hyperion and his hordes... Written by Anonymous   on www.imbd.com
What I thought about it:
Going into this flick I kind of had the expectations of Conan the Barbarian, which it would probably suck like almost every other ancient/god themes movie.  I have to say I was pleasantly surprised, there were a few groan worthy moments, but for the most part I was engrossed in the movie. Mickey Rourke as per his usual makes an exceedingly good “bad guy” he rocked the hell out of his part as King Hyperion.  The guy who played Theseus, Henry Cavill, also did a great job with his part. I don’t recognize H. Cavill from any other movie that I can remember so I assume this may be his first leading role in a big budget blockbuster film. He did a better job than I thought he would and I am sure we will be seeing more of him in the future. In this flick the gods are portrayed more as the “good guys” which through me off a bit. I am used to seeing the Gods as fickle, vain, and uncaring. I’m still not sure if I believe/like this change in the Gods image, but hey I can role with it. This movie is extremely violent and the fight scenes I have to admit are pretty bad ass.  Theseus and the Gods kick some serious arse. The graphics and explosions don’t overpower the movie as they can sometimes do, but definitely enhanced. The chemistry between the Oracle and Theseus feels forced so it’s a good thing you don’t have to suffer through it much. It’s more of an “oh by the way” we are attracted to each other rather than consuming the plot which can also tend to happen. Overall, there is a good balance between the main plot and any sub-plots. I really enjoyed this movie way more than I thought I would.  I wouldn’t say it is as good as 300, but it’s in the same league in my opinion.
Rating:
Watch in the theater! Don’t wait for DVD you’ll lose a lot in the graphics. I don’t think 3D is necessary however.
*This review is also available on my other blog www.paranormalromancenovel.com